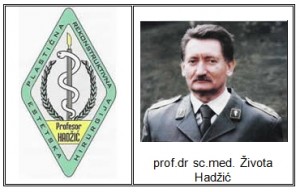 Medical center for the plastic and reconstructive surgery “PROFESSOR HADZIC” was established in 2003. Its owner and founder is prof.dr sc.med. Zivota Hadzic, a specialist in plastic and reconstructive surgery.He graduatet in medicine at the University of Belgrade as a military schoolar. After he had finished his training period in health center in the town of Tuzla,he specialised in plastic and reconstructive surgery atthe Plastic Surgery and Burns Clinic, a part of a Military-medical Academy in Belgrade.After his specialisation, he kept working at the Clinic, where he first became the chief of staff, then a doctor of medical sciense, an assistant professor and finally a professor. He carried out the duties of a doctor at the department, as the head of the department, and as the head of the Plastic Surgery and Burns Clinic in the rank of colonel. In order to gain more specialised training he spent six months at the “Broke Army Institute for surgical resarch”, San Antonio, Texas, the USA. He has extensive knowledge, skills and expirience in solving the most complicated problems in plastic surgery as well as in treatment of most severe burns.

All operations are performed by professor Hadzic and the team of reliable and proven professionals. In case of need, they cooperate with eminent experts in different fields of medicine from Military-medical Academy and Clinical center.